In Memory of Bill Saylor 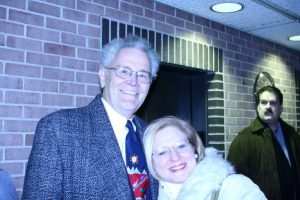 It is with deep sadness that the Lancaster County Democratic Committee shares word of the passing of Bill Saylor, a longtime supporter and friend. He passed away on Saturday morning, March 21, 2020.

Bill first came onto the public scene as a reporter for WGAL-TV. During his career from 1961 to 1995, he reported on major events such as President Kennedy’s visit, Hurricane Agnes, and the Three Mile Island partial meltdown. He also became known as “The Atlantic Weather Man” during his tenure.

Bill entered politics after retiring from WGAL. In 1995, he was a candidate for County Commissioner. In 1996, he ran for State Senate in the 13th District. He ran for County Commissioner again in 1999 and in 2003. In 2000, he served as Campaign Chair for Gary Spicer, who ran for State Representative in the 98th District. During this span and afterwards, he served as a Democratic Committee Person in his precinct, and as the Personnel Committee Chair for the LCDC Executive Board.

He was also an ardent supporter of unions. Bill was active with his union during his time with WGAL. After his retirement, he supported other unions’ efforts, often visiting striking workers on their picket lines.

For his commitment to the party, as well as to the community during his time as a reporter, the LCDC bestowed upon Bill its Lifetime Achievement Award in 2005.

He is survived by his wife, Judy, who has also been very active with the Party. Please keep her in your thoughts at this time.